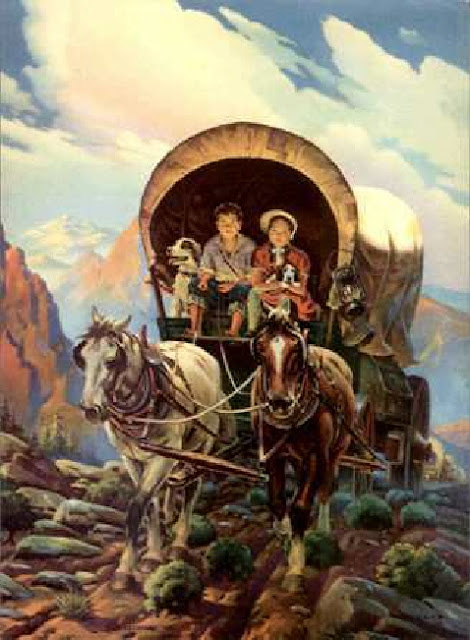 If you remember from chapter three, the family made a move to South Dakota in 1899. This location was chosen because two of Herman’s aunts lived there.

The trip from Nebraska was an arduous, long 360-mile journey. That, by today’s modes of travel, is nothing. But moving along slowly in a covered wagon for 360 miles with seven children and livestock in tow would take much endurance. The wagons only covered 12 – 20 miles on an average day, so it would have taken anywhere from 18 – 30 days to make the trip.

My grandfather recounted one of his memories of the trip, “When we – that is my folks – moved to Avon, South Dakota from Nebraska we crossed the Missouri River on a flat ferry boat...crossed…with our 3 wagons and 7 others besides. It was a broad flatboat with railings almost all around propelled by a steam engine built on that great platform, and while crossing it belched great volumes of black smoke; it didn’t go fast but we got across alright.”

Traveling in three covered wagons, two of the sons, Rhinehold (called “Ray”) and Herbert (my grandfather) were given the great responsibility of leading several mules on horseback. They had difficulty keeping up with the wagons because the mules were stubborn and traveled slowly or not at all if they had such a mind.

At times the mules were so immoveable that the boys would lose sight of the little wagon train. At those times, in fear, they wondered if they would ever see their parents again. But all family members made the journey safely. It is interesting to note, however, that these two boys were only 8 and 10 years of age at the time, Herbert being the youngest. What a great weight of responsibility for such small boys!

In South Dakota, a farm was rented and Herman raised corn, wheat, oats and had pastures of grasslands – I assume for livestock to feed on. He supplemented the crop income if a crop was actually produced and sold, by painting buildings and digging cisterns.

Franziska and Hermann’s relatives – his two aunt’s families – helped each other in the fields, threshing grain and working together six days out of the week. On Sundays, they worshipped and served together in the German Baptist Church in Avon.

The family continued to struggle in South Dakota as they had in Nebraska. As mentioned in the last chapter, two more children were born there, Gustav and Arthur, but died in infancy. My grandfather, Herbert Meyer, remembered that one child died as a result of drinking tainted water. This hardship, coupled with the same crop difficulties they faced in Nebraska, had to have been extremely disheartening.

About this time, Hermann’s brother, Ewald, who had come to America shortly after Hermann and having settled in LaSalle, Colorado, began urging Hermann and Franziska to join him there. Ewald was the pastor of the Beebe Draw Baptist Church in LaSalle and also farmed. He implored Hermann, “Why, with all those boys you could really make money raising sugar beets.”

But these moves were difficult for Franziska. Imagine her weariness with seven children to care for and the continued struggle she faced with each of the little ones that were laid to rest over the years. There was also the burden of farming, which the wife shared in most of the time. I’m sure she was doubtful after so many moves, each with its accompanying disappointment, that their lot would be any better in Colorado. Despite her initial reluctance, however, in 1904 the livestock and farm machinery were loaded onto a railroad car and the family of nine picked up and moved to Colorado.

Once there, Hermann and Franziska joined the Beebe Draw Baptist Church, where Hermann’s brother, Ewald, pastored. Hermann began farming again and he also preached at the church when his brother needed him to fill in. But Hermann not only preached at church, he also made sure that no one left his home without encouragement from the Scriptures.

Hermann also enjoyed writing poems in his native German language for special occasions. These verses Franziska faithfully recorded for him. During dinner one evening Hermann suddenly sprang from his chair and motioned for Franziska to follow him. They went in the bedroom and shut the door. I'm sure the children wondered about this, but they stayed seated at the table nonetheless. Sometime later the bedroom door opened and Hermann and Franziska joined the children again. They then listened as Hermann read the poem he had just composed and that Franziska had recorded.

Max, a little boy born in Culbertson, Nebraska, died less than a year after the family moved to Colorado. He had contracted diphtheria and was so ill that the doctor was asked to come to attend him. Unfortunately, the doctor arrived, but was completely intoxicated and could, therefore, do nothing to help little Max. It may have been too late anyway by the time he arrived. Sadly, on Valentine’s Day, 1905, Max died, having just turned six years of age a few days before.

The family had a photograph taken soon after this loss. Perhaps Franziska felt a need to have a tangible record of her children that remained after having given Max over to the grave. (For those of you who read the first three chapters before this chapter was posted [Feb. 16th, 2008], you remember that this was stated to have occurred in Culbertson in chapter three. However, I had the chronology wrong and apologize for the confusion.)

In all of her struggles, I’m sure there were times when Franziska felt like giving up. After all, she had surrendered 6 of her 13 children over to the grave. She had faced the near-starvation of her living children and the failure of one crop after another. She had seen her husband labor strenuously, long hours each day to get a crop into the ground only to watch it sprout and then die in the blasting heat of an arid summer dust storm.

I wonder what Scriptures Franziska turned to in order to find solace? Perhaps she was familiar with Habakuk 3:17-18: "Though the fig tree should not blossom and there be no fruit on the vines; though the yield of the olive should fail and the fields produce no food; though the flock should be cut off from the fold and there be no cattle in the stalls, yet I will exult in the Lord, I will rejoice in the God of my salvation." Did she read Isaiah 41:10? "Do not fear for I am with you; do not anxiously look about for I am your God. I will strengthen you, surely I will help you, surely I will uphold you with my righteous right hand." Or Psalm 34:18: "The LORD is near to the brokenhearted and saves those who are crushed in spirit."

But Franziska's story does have many years of joy. In chapter five we will discover that now, after much past difficulty, with the family settled in LaSalle, Colorado, at long last, they were able to prosper. We will also get to know Franziska a little better – how she spent her time, what she enjoyed doing at home and how she ministered in the body of Christ.