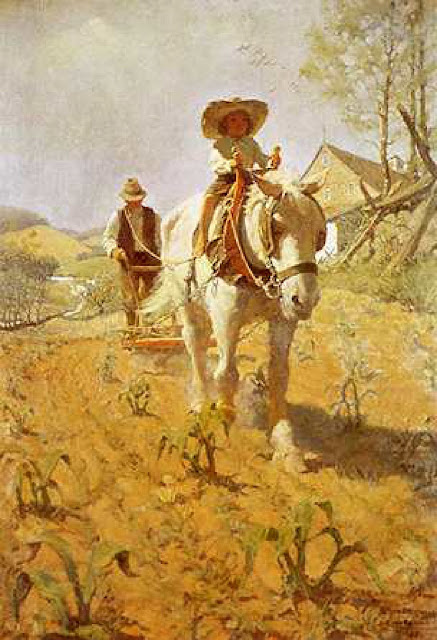 We left Franziska in Baltimore with her husband and three-year-old son, Helmuth, having just arrived from Germany on Sept 28th, 1886. Hermann had $700 in his pocket when they landed in the U.S. He was fascinated with Baltimore because it reminded him of Germany. But since he and Franziska had firmly decided on Nebraska, they soon continued on their journey.

When they arrived in Nebraska they settled in the small town of Beatrice. One of the first things they did was to join the local church. They were drawn to Beatrice because other German immigrants had settled there. It wasn’t long, however, before they picked up stakes and moved to Palisade, Nebraska.

Here, the couple homesteaded, erecting a sod house. Agriculture was somewhat familiar to Herman for he had farmed in Germany and had some experience operating steam engines and also threshing machines which were used to harvest wheat. He was kept busy six days out of the week with this new venture.

On Sundays, the neighbors crowded into Hermann and Franziska's tiny 2-room sod house for Sunday School and church services. Franziska was troubled about the large man who came to the meetings. It seems that he enjoyed stomping his feet rather vigorously to the music and she was concerned that he might break through the floorboards and fall into the dugout beneath.

Though that never happened, this bird’s eye view into the worship services that were held in their home reveals the fact that these were no stogy meetings, rather, they were full of life and obviously enjoyable. Franziska's reaction to this man's energy is a confirmation of this for she was not critical of his expression of joy, only concerned for his safety.

Five more children were added to the family in Palisade – Helene Anna Marie (1887), Reinhold Gottlieb (1889), Herbert August (1890; my grandfather – my father’s father), Frederick Wilhelm (1892), and Rudolph Ewald (1894). Now with five more mouths to feed there was greater pressure upon Hermann to see that his crops would provide for the needs of the family. But this was not the case. The land was of very poor quality. The scarcity of food became a problem and at times they barely survived. With nothing but crop failures year after year due to very dry conditions, the Meyer family was forced to move several more times, to Culbertson first, still attempting to farm, but the conditions got no better.

This was the land that was portrayed by American land developers as heavenly. In Germany, ads were posted on street corners picturing a chicken with a fork stuck in it, as if all one had to do was grab a utensil and eat. Now reality was before this couple and trusting God in the midst of the famine (literally) was not an easy thing to do. These were very difficult times for the family, sometimes barely staying alive because of a lack of food.

Three more children were born in Culbertson – Emma Amalia, Hannah and a little boy, Max. Hannah, however, died in infancy, meaning she may have been as old as one or two, as were the two little girls who died in Germany just before Hermann and Franziska left for America. It was also said of them that they died in infancy, though Hedwig was one and Hermine was two.

With one disaster following another, we might wonder where God was in all of this. Did He not love Hermann and Franziska? If His love is measured only in doses of material prosperity and "good times", then we would have to say that He did not love them. But God's love does not work that way. Romans 8:38-39 assures us "that neither death, nor life, nor angels, nor principalities, nor things present, nor things to come, nor powers, nor height, nor depth, nor any other created thing, will be able to separate us from the love of God, which is in Christ Jesus our Lord." No difficulty can separate us from His love. His love is upon us in the midst of the difficulty which, in fact, is designed by His hand of love for us. He draws us to Himself through the difficulty to pour Himself out in comforting billows upon our grief-stricken hearts.

In Jeremiah 32:40-41, Gods tells us, "I will make with them an everlasting covenant, that I will not turn away from doing good to them; and I will put the fear of me in their hearts, that they may not turn from me. I will rejoice in doing them good...with all my heart and all my soul." What we think is good and what God knows is good are sometimes two different things. He is in the process of training us. But everything, pleasant or unpleasant, that comes to the child of God is from His sovereign hand of goodness and love - even the deepest, most heartbreaking situations.

Did Franziska bear up under this great distress by remembering that nothing would ever, could ever or had ever separated her from her Heavenly Father's love - that, in fact, the trial was even His love expressed working for her good and His glory? She must have settled there on that truth for she never stopped serving her Savior out of a heart full of love for Him.

In 1899, 13 years after having arrived in America, following many sad experiences, including times of near starvation, the family traveled in three covered wagons, crossing the Missouri River into South Dakota to join relatives who lived there. Here they attended the Avon Baptist Church and continued farming. Two more children were born in South Dakota, Gustav and Arthur, but both died in infancy.

With every move, the family became part of the local church. Their life was centered there, and they regarded it as an extension of their immediate family. Hermann and Franziska served wherever they were needed. They regarded the church as precious – as the manifestation of Christ. With such heartache to endure, surely the church was a wellspring of compassion and stability for this couple.

Chapter four will follow and will tell a brighter story as God works to establish a stable residence and livelihood for Hermann and Franziska's family.